According to an English translation of an article from Politik, a Danish news site, an architectural firm has made prototypes for subsea mining to extract metals for batteries, but environmental organizations will slow down their plans. This conflict is buried several kilometers down in the depths of the Pacific Ocean. It is about metals, billions, green energy and the future of the Earth. It is an environmental political storm, and the Danish star architect Bjarke Ingels has ended up in the middle of it.

An organization that represents a number of Pacific islands criticizes Bjarke Ingels Group (BIG) for the studio’s role in an underwater mining project to find minerals for the production of batteries, with a special focus on the growing electric car industry.

“BIG does not understand the impact this could have on the seabed,” says Maureen Penjueli, coordinator of the Pacific Network on Globalization (PANG).

“They have not learnt the lessons to understand the environment in which their equipment is to be used.”

For the Canadian company, The Metals Company, BIG has designed potential prototypes for a number of vessels and platforms that can be used to vacuum the seabed for small potato-shaped lumps of stone – so-called manganese nodules – which contain metals used for the production of batteries.

Today, these metals are mined in landmines, often in poor areas with child labor, and have major environmental and social costs.

The sea, on the other hand, is a much larger and potentially more climate-friendly resource for extracting the raw materials, according to the players in the subsea mining industry, who say that it is crucial to ensure a conversion to renewable energy.

But while interest in deep-sea mining is high, the environmental consequences could prove to be just as great and catastrophic, say a number of scientists and NGOs.

Among other things, in an open letter to Bjarke Ingels, the Pacific Network on Globalization  urges the Danish architect to reconsider his collaboration with the mining industry.

“It may well be that BIG thinks that with brush strokes and smart design they can soften the hard edges of a 300 ton heavy steel monster that eats the seabed. But we have seen through your beautiful monsters, which threaten the seabed and forever destroy the cradle to the origin of life, “writes PANG in the letter to the Danish architect.

As part of prototypes for the mining project, BIG has designed a kind of underwater vacuum cleaner that will pick up the metal-rich lumps of rock from the seabed. By immersing a computer mouse-shaped robot over the lumps of stone, it will be possible to shoot seawater in and thus loosen the stones with minimal impact on the seabed, BIG claims in their presentation material.

Bjarke Ingels has not given the opportunity to be interviewed, but in a written answer he says the project can only be realized when the environmental consequences have been mapped.

“BIG and The Metals Company completely agree that it requires more research in the field before permission can be granted for any collection of metals from the seabed,” writes Bjarke Ingels and continues:

“The green transition depends on companies and actors leading the way, challenging the industry and demanding that we find the answers to tomorrow’s challenges on a responsible, research-based basis, and that is what BIG does, because if if we are to win the climate battle, it requires someone to step into unknown lands and seek new solutions ”. 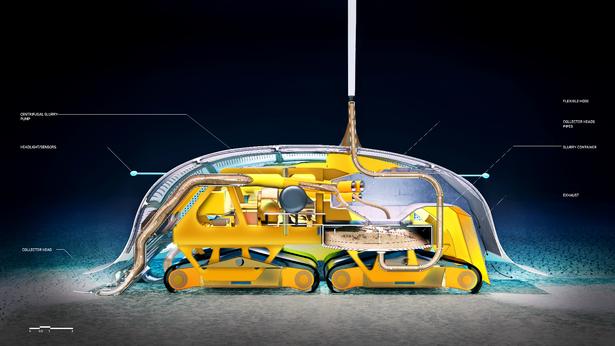 The shell of the Subsea Collector model covers hoses that lift manganese nodules from the seabed. Rendering ^ via BIG – Bjarke Ingels Group

More than 400 scientists and advisers from 44 countries have signed a declaration asking the industry to halt mining plans due to the environmental consequences.

Deep-sea mining will “result in the loss of biodiversity and ecosystem function, which would be irreversible over several generations,” the statement said, warning that mining would damage biodiversity and the seabed’s ability to sequester carbon.

The EU has proposed slowing down mining experiments in European waters, while companies such as Google, Volvo and Samsung have supported the World Wide Fund for Nature’s call to stop offshore mining activity.

Greenpeace believes the industry is selling an imaginative picture of minimal risk of deep-sea mining.

“Every step towards the exploitation of the deep sea must be stopped, and this also applies to further development and testing of equipment that can be used to damage the sea,” says Laura Meller, ocean policy advisor for Greenpeace in the Nordic region.

According to The Metals Company, the extraction of submarine metals is the best solution if we have to carry out a major conversion to electric cars and renewable energy, and it can supply battery metals with up to 90 percent less carbon emissions than onshore mining.

Politiken has contacted The Metals Company to get an interview, but the company has not replied before our editorial deadline.

Although The Metals Company is behind the project, PANG has chosen to criticize BIG’s role due to the green profile of the Danish design studio.

“BIG seems naive in this case. Just from a climate perspective, the ocean’s function in terms of carbon sequestration offsets any gain by digging for metals, ”says Maureen Penjueli, who is PANG’s coordinator.

“If the current research concludes that the collection of metals from the seabed can take place in an environmentally and socially responsible way, we will be able to ensure and accelerate the green transition” says Ingels.

Bjarke Ingels emphasizes that The Metals Company will not start collecting metals on the seabed until environmental impact analyzes have been carried out.

“The Metals Company itself participates in several research projects and has also funded research for $ 75 million for scientific studies of possible impacts on the marine environment through mining,” writes Bjarke Ingels.

“If the current research and studies conclude that the collection of metals from the seabed can take place in an environmentally and socially responsible way, we will be able to ensure and accelerate the green transition.”

According to biologists, it is only a fraction of the deep seabed that has been explored today, but many see the Pacific Ocean as a kind of Klondike rush that not only saves on metals, but also potentially on an economic treasure.

According to the plan, The Metals Company is to be listed on the stock exchange in July, and the company has been valued at $ 3 billion, Bloomberg writes.

But mining has not yet started.

In the coming years, the International Seabed Authority (ISA), set up by the United Nations, will have to decide whether to give the green light to start a regular mining operation.

BIG has previously landed in controversial political waters based on the company’s international partnerships.

It created a minor sh*tstorm when Bjarke Ingels was photographed with the climate-denying Brazilian president, Jair Bolsonaro, in connection with Ingels being invited to Brazil to discuss a sustainable tourism plan.

The Saudi mega-project Qiddiya – a planned resort town outside the capital Riyadh – and a new national theater in the Albanian capital Tirana have also attracted criticism.

“Bjarke Ingels has previously talked about his relationship with the sea, and about how he can feel the rhythms of the water. His company could become even more sustainable if they seriously understood the role that the sea performs for us. Because like the forests, the sea helps to keep us all alive, ” says Maureen Penjueli from PANG.

“As human beings, we no longer understand the true value of these ancient systems.”